Warning: mkdir(): No such file or directory in /home/customer/www/holiday.my/public_html/wp-content/mu-plugins/endurance-page-cache.php on line 1372
 Major festivals in Sarawak | 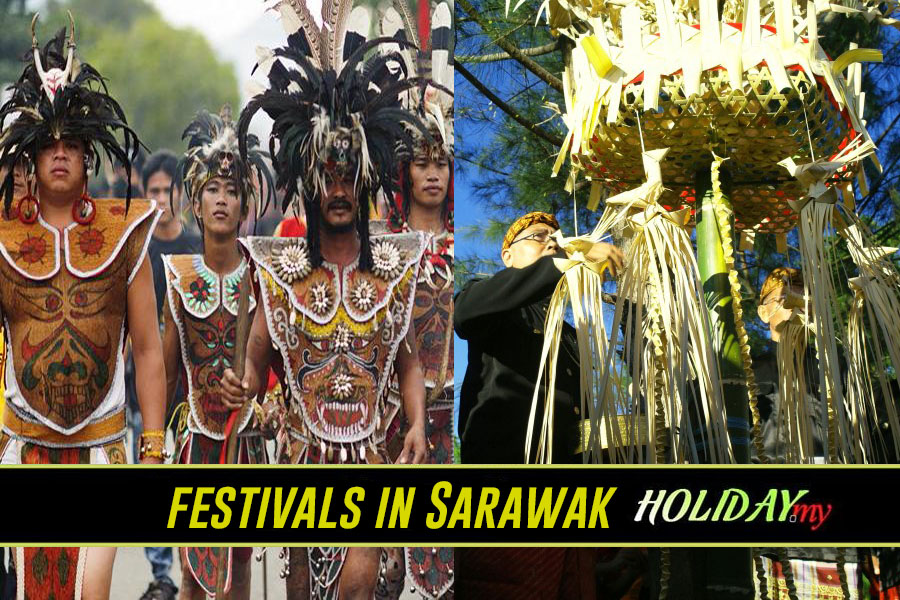 Sarawak is known to be one of the most cultural states in Malaysia. The East Malaysian is made up of a multi-cultural and multi-ethnic society where apart from the usual Chinese New Year, Hari Raya AidilFitri, Deepavali which are observed by Malaysians around the country, they have many other festivals like the Gawai Dayak, the Pesta Meow, the Kaul and many more.

Christmas and New Years’ Day are also celebrated with much fanfare in Sarawak because it is recorded that almost 50% of Sarawakians are Christians. Sarawak is rich with culture and tradition because the society is made up of many different ethnics and indigenous people. There are the Ibans, Melanaus, Orang Ulus, Kenyah, Lum Bawang, Kelabits and many more of whom still practices their traditions today.

Rich with culture and traditions

This landscape mean that one can observe many different types of practices and lifestyle which until today are still very much observed. Traditional clothing, food, design and such are very much preserved and can still be evidently seen when one visits Sarawak. There is the Sarawak Cultural Village that displays most of the different ethnicities here as well as most of their common practices. Performances and dances are demonstrated to the visitors to showcase the rich heritage of the people here.

The Kaul is an occasion celebrated by the Melanau community. It is usually celebrated around the middle of March or early in April. This is the time of the start of the fishing season and the celebration is observed to the spirits for a fruitful catchment season. The festival is usually celebrated in the town of Mukah where boats are used and decorated to be floated into the sea. It serves as a type of offering where items are placed onto the boat for the spirits. Mukah is a town located around the middle areas of Sarawak with a major Melanau population. The Kaul is celebrated by some 10,000 people where it is also typically a thanksgiving ceremony.

One of the events that take place during Kaul is the Tibou Game which is a dangerous game where young men swing around holding the end of a rope which is about 10 meters long. This is where the men will dive down to catch the giant swing, a game which is meant only for the experts and not the novice. Here is also the traditional alu-alu dance is performed while there are also other demonstrations like martial arts and such while the Umai dish, a popular local Melanau dish can also be savoured.

The Gawai Dayak is the most popular festival observed in the state of Sarawak. It is a celebration to commemorate the end of the rice harvest here and is an annual state holiday. Gawai Dayak is usually celebrated at the end of May or in the beginning of June where the first 2 days of June are usually the state holidays. During this time, Sarawak goes into celebratory mood where Iban ladies will be dressed in their traditional costumes and perform dances.

Depending on the location, the celebrations of Gawai Dayak differs because every community will have their own traditions of observing this celebration. Usually, Tuak which is the common rice wine from Sarawak is served while one can also enjoy other local delicacies like the penganan as well. In the cities like Kuching and Miri, Gawai is often seen as more commercial, so if you are looking to experience the more traditional form of celebration, then you must head out to the Longhouses. It starts on Gawai Eve which is on 31 May and in most Iban Longhouses, the muai Antu Rua ceremony is performed which is to cast away the spirit of greed and to wade away bad fortune. A gong is chimed at midnight and then the celebration starts. There will be a few days of fun-filled activities which include a lot of food, cock-fighting, blow pipe competitions and many more.

The Rainforest World Music Festival brings together musicians from all over the world to Kuching each year and visitors are able to enjoy some of the best music around. It is one of the highlights of the festivals in Sarawak since it began a few years ago and since then, music lovers have continued to come back for more. Held around the month of July and August, the event is held at the Sarawak Cultural Village and takes place for 3 days. The festival started in 2005 with only about 400 people attendees and have grown by leaps and bounds ever since.

One of the most anticipated events in Sarawak

The intention of this event is to celebrate the diversity of world music which is widely reflected by the state’s multi-ethnicity and multi-cultural community. The festival draws some 30,000 people ever the weekend and is considered to be one of the largest music-oriented events in the country where one can enjoy modern music to traditional ones, performances by local bands as well as internationally renowned acts. As the name suggests, the use of acoustic instruments are encouraged as this is where one can enjoy un-commercial musical talents live. Acts come from around Malaysia as well as from the surrounding regions like Australia, Indonesia and as far as Poland and Greece.

Pesta Meow, as the name suggests is a festival about cats and it is held in Kuching, the state capital of Sarawak around the month of November. It is the time where cat lovers from around the state come together to celebrate the mascot of the city where Kuching means ‘cat’. There are many types of events held during this time throughout the few days and are catered for everyone in the family. Here is where one can enjoy performances, join competitions (for cats and their owners), take part in games as well as watch screenings and buy some novelties too.

For the cat lovers, there are photo competitions, story telling competitions as well as performances as well as demonstrations. Workshops too are held and in one edition there even a Guess the Cat’s Weight contest. Generally, it is an event to go to if you are a cat lover and even if you aren’t there are more than enough activities there for you to enjoy where there are screenings of movies and other competitions. For the kids and children, there are the likes of colouring competition, drawing as well as many other events for the young ones to enjoy.

The Kuching Festival is held to commemorate Kuching gaining city status. The state capital was awarded the status back in 1998 and has grown and developed into one of the major cities in the region. For the year 2011, the Kuching Festival is held from July to September 16 which coincides with Malaysia Day. The kick-off event was the Datuk Bandar Football Youth Cup and is organized by the Kuching City North Commission.

The organizers have also taken into consideration the upcoming fasting Ramadhan month where events are held around the fasting times. Hence, there are many events that were organized to take place before August where fasting starts. Among some of the events which prelude the festival is the International Orchid Show that saw countries around the region participating. On top of that, some 5 other competitions will be held in conjunction with the orchid show like flora arrangement, colouring competition, landscaping and others. The Pesta Bergendang was also a prelude to the Festival.

Other festivals and events

Meanwhile, in Kuching City South, the commission has also organized some activities like the Festival Fair that include music, arts and sports in conjunction with the Festival. There will also be other events like the Yuanji dance performances, martial arts demonstrations and many more.

Berjaya Hotels & Resorts is the leisure arm of Berjaya Land Berhad, which is a subsidiary of Berjaya Group of Companies, a public listed Malaysian

https://www.youtube.com/watch?v=DvVhMG56c2o GUCCI OSTERIA – KARIME LÓPEZ Karime López went to Paris to learn French to prepare for art college in France, and instead discovered the


Warning: A non-numeric value encountered in /home/customer/www/holiday.my/public_html/wp-includes/functions.php on line 74